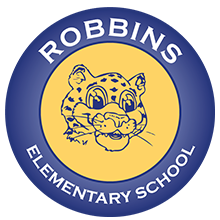 MISSION STATEMENT
The mission of W.D. Robbins Elementary School is to provide the opportunity for all students to become academically successful, technologically literate, and socially competent individuals.
Home of the Lil' Leopards
Mission Statement

The mission of W.D. Robbins Elementary School is to provide the opportunity for all students to become academically successful, technologically literate, and socially competent individuals.  This mission will be accomplished by providing an environment which is conducive to learning, with a challenging and updated curriculum, taught by a competent and motivated staff.  This mission will be supported by parents and the community.

Our school is named after Prof. William Douglass Robbins.  Read about Mr. Robbins below.

William Douglass Robbins came to Mobile at the age of two and was the son of Joe J. and Virginia Washington-Robbins of Coy, Alabama.  He was one of four children, the only son, and his sisters were Katherine, Annie, and Hattie.  Robbins was born on Christmas Day in 1897 in Lower Peach Tree, Alabama.  He graduated from the Broad Street Academy under William Amyer Caldwell in the class of 1913.  He served his country during World War I.  Robbins had the privilege of a secondary education and attended Alabama State College.  He later received his Master's degree from New York University.  Robbins was awarded honorary degrees from Tuskegee Institute and Alabama State College because of his outstanding achievements in the field of music.  He was a member of the Franklin Street Baptist Church where he served many years as the organist.  His educational experiences cover many miles in that he taught at Cottage Hill, Allenville, Grand Bay, and Booker T. Washington Schools.  When the new A. F. Owens School was built near Davis Avenue in 1932, he was selected to be the principal.  He served as the principal of this school from 1932 until his death in 1963.

Robbins studied under the great educator, George Washington Carver, while in Tuskegee.  As many people remembered, he would use phonics to teach young people how to read.  He ran an obedient school and reminded the children to be respectful of one another.  There were so many children who passed under the leadership of Professor Robbins, and they remembered the things he taught them which contributed to their success as adults in their chosen fields.  After a brief illness, Robbins died November 11, 1963, at the age of sixty-four and is buried in the Oaklawn Cemetery.  The newly built Robbins Elementary School was dedicated in honor of William Douglass Robbins on September 12, 1965.  This elementary school is located on Main Street in Prichard, Alabama.

2.  Be prepared with all school supplies daily.

3.  Return all lost items to the office immediately.

4.  Attend school everyday and be on time.

5.  Use self-control and make good choices.

All parents are required to attend a minimum of two parent/teacher conferences each year. Please make every effort to attend. If there is an emergency and you will not be able to attend, please let the teacher know and reschedule as soon as possible.  A teacher’s schedule does not permit time for unexpected drop-in conferences. This ensures that your child receives the maximum amount of instructional time. You are welcomed to schedule conferences during your child’s teacher’s planning time or before/after school.

If you receive a note from administration requesting a conference, it is extremely important that you make arrangements to attend. These notes generally indicate a serious problem.

*Any conflicts in the classroom should be discussed with the teacher before scheduling a conference with administration.  Adminisrative conferences will not occur before 8:30 a.m. in order to allow time to begin the school day.

Due to the importance of daily attendance it is imperative that students attend the full school day from 8:15 a.m. to 3:00 p.m.  Therefore, no early dismissals will be allowed after 2:30 p.m.  Please plan all doctor appointments, etc. accordingly.  Thank you for your cooperation and understanding with this school-wide policy.